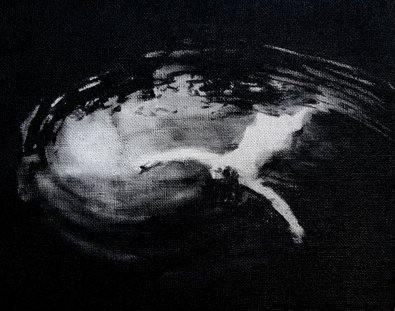 I’ve been working as a painter since 1999, when I started painting, simply, the things I saw around me: street scenes of Luxembourg, the country I had grown up in and that I had returned to, with some apprehension, as a young adult. I was driven by the desire to decipher the world around me, which seemed loaded with ominous, impenetrable meaning, so that I might find a way to fit into my surroundings with a little less distrust and unease. I soon expanded my subject matter to include stills taken from TV ads and films, as well as news imagery, with a preference for anything that pointed, in my eyes, toward life’s absurdity. Around 2008, I tentatively shifted away from purely naturalistic representation and also toward more personally meaningful imagery, with the hope of opening myself up to a less cognitive approach. The results were somewhat encouraging but not fully convincing, and I took a near-total break from painting in 2012 to study philosophy. Four years later, I returned to painting with a firmer conviction that reasoning had nothing to do with what I was looking for.

My work since is the result of a much more intuitive approach, at least in terms of my history of sometimes crippling diffidence. For over a year now, I’ve been painting almost exclusively in black and white—I believe that we have a more primordial, deep relation to colorless imagery because that is how we, as newborns, first see the world, and because, also, that is how things appear in very dim light, such as when we wake up or go to sleep. I’m drawn to the liminal, to moods of transition from one world to another, to scenes of meditative suspension between two states (I’ve been painting a lot of people immersed in water), to the intricacies of black changing into white, to ominous openings into unknown worlds. Meaning, I have found, is not a fixed quality, rather it arises in the movement afforded by these openings.

And in my best moments, that is how I see both my practice of painting and the resulting paintings themselves: as thresholds toward the unknown, as leaps of faith into new experiences, as windows into a meaningful connection to the world.